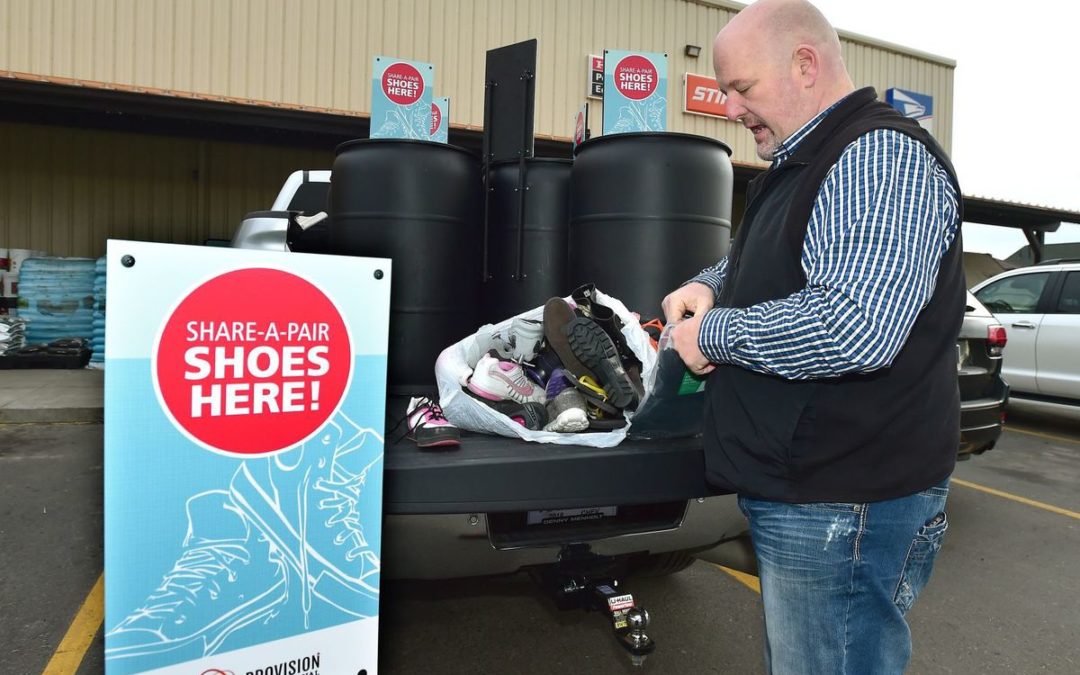 For two weeks after Thanksgiving, Yellowstone County residents with a footwear surplus can donate their used shoes, boots, heels and sandals to Billings-based Provision International. The group will then re-route those donations to a handful of developing countries as part of its “Share-a-Pair” shoe drive.

The Billings-based nonprofit has sponsored the program since 2012, and also works with missionary groups while coordinating donations of food, clothing, blankets and other goods to a handful of developing countries across the globe.

Lance Lanning, the group’s president, said he was on a mission trip in El Salvador in 2012, helping to build a school, when the idea for the program was first seeded. Barefoot children kept running throughout the construction site, he said.

“A little girl stepped on a piece of rebar, and she ran it through her foot. She didn’t have any shoes,” Lanning said. “I got home and looked and there were probably eight to 10 shoes there — like all of us have.”

He said a board member suggested a used-shoe drive that eventually grew into “Share-a-Pair” later that year. Now in its sixth year, the program has collected somewhere in the ballpark of 50,000 pairs of shoes, Lanning estimated. Those donations have mainly come from within Montana, although the group’s network of volunteers includes some Idahoans and northern Wyomingites who have also sponsored shoe drives.

Most of those have been small affairs, with a volunteer organizing a barbecue or similar event and asking friends to bring along their unwanted footwear. Around 95 percent of those donations are used shoes, he said.

“There’s a lot of used shoes that we don’t think about, that we just discard, that can be a blessing for someone who doesn’t have any shoes,” Lanning said.

Lanning expects that the upcoming Billings-wide shoe drive could net somewhere north of 10,000 pairs of shoes, but he said there’s no set goal. The countries in which Provision has partners — including El Salvador, Haiti, Uganda, Tanzania, Slovakia and Moldova — have plenty of need for whatever footwear Yellowstone County residents are able to send.

“They are living hand-to-mouth,” Lanning said. “Most of us can’t fathom that type of living.”

Those wanting to donate shoes to the “Share-a-Pair” shoe drive can do so at any of the six Ace Hardware stores in Yellowstone County from Nov. 24 through Dec. 10. Shoes may be dropped off in the black, 55-gallon barrels in the stores’ foyers.

Billings-area residents can also call Provision at 406-698-6913 to have a volunteer pick up any unneeded pairs of shoes from their homes.